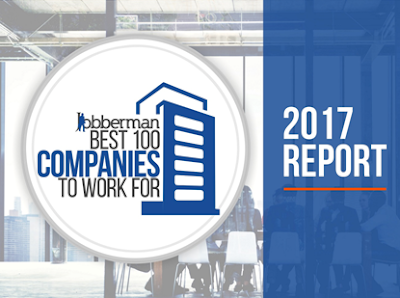 In this survey, multinational companies held the top three spots on the Jobberman Best 100 Companies to Work For, contrary to the survey report in 2015.

According to the ranking, General Electric, Airtel and Ericsson emerged the top three organisations to work for despite the biting reality of the nation's economic recession. Climbing up the ranks, Google moved up from its 8th spot in 2015 to occupy number 4.

Meanwhile, the banking sector locked down three spots in the top 10 for the first time; with Guaranty Trust Bank, First Bank and Union Bank taking the 6th, 7th and 9th spots respectively compared to 56th, not on the list and 33rd respectively in the previous year.

Speaking at the survey report launch, Busola Babatunde. Jobberman’s Campaign Manager said, “The Jobberman Best 100 Companies to Work For is based on an online survey of professionals across all industries. To achieve this, Jobberman utilised its 2 million+ database as well as reaching out through email, social media, and partner channels.” The results were then analysed and tallied to compile the top 100 list.


Babatunde added that the survey captured questions on work experience, parameters and conditions.

“We wanted to capture feedback from individuals who actually work in these companies. When you talk about the culture, systems and policies in your workplace, it gives a more genuine outlook of how people feel,” she offered.

Below is a sneak preview of the report with the top 10 out of the 100 best companies to work for. View Complete Report here.