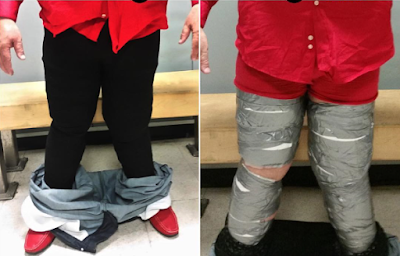 A man was caught at JFK Airport trying to smuggle cocaine into the United States by taping it to his legs. Mayobanex Ruiz Gomez, 48, from Queens had just arrived JFK Airport from his native Dominican Republic when he was found by customs officers with 5 pounds of cocaine plastered around his legs.
The agents noticed he was acting nervous while they were examining his suitcase so he was searched thoroughly and the drugs worth more than $83,000 on the street was found on him. He now faces federal narcotics smuggling charges and will be prosecuted by the U.S. Attorney's Office in the U.S. Eastern District Court of New York.

This is the second time this month a man will be caught at the same airport trying to smuggle cocaine by taping it to his legs. Just on March 4th, Juan Carlos Galan Luperon, a 28-year-old from

Manhattan, had been caught with 10 pounds of cocaine strapped to his legs. He had been returning to the United States from Santo Domingo. Authorities do not think the two incidents are connected.
Tweet