Home » Local » Photo: 14-year-old student left blind after teacher flogged her in the eye for coming late to school in Kaduna

Photo: 14-year-old student left blind after teacher flogged her in the eye for coming late to school in Kaduna 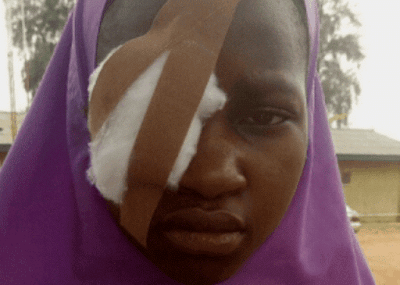 Parents are seeking for justice and assistance after their 14-year-old daughter, a Junior Secondary School female student of Government Secondary School, Kachia, Kaduna State, lost her eyesight after she was flogged in the eye by a teacher for coming late to school.

Raliya Suleiman was allegedly hit in the right eye by the teacher who caned her repeatedly leading to the loss of her eyesight. She is currently receiving medical treatment at the National Eye Center Kaduna.

Confirming the incident, the Public Relations Officer for the Kaduna State Police Command, Aliyu Usman said the case was reported at Kachia police division and is currently under investigation
Raliya’s father, Sulieman Umar Kachia, told Daily Trust that on 23rd February, 2017, the teacher, who was also the school’s discipline master, used a cane with several iron balls tied to it to beat his daughter and in the process hit her right eye and destroyed it.

“I reported the case to Kachia Police Division and the teacher took her to Kachia General Hospital, from where we were referred to National Eye Center in Kaduna. When we got to the National Eye Center, we were told that her eye lenses had been destroyed and she cannot see with the eye. The only treatment they gave was to adjust the eyeball from falling into her skull and to stop the bleeding.”
He however said some medical officers at a private eye clinic in Kaduna said they can restore the eyesight but demanded  a deposit of N1 million.

“Where do I raise N1 million from? Even if I sell my house and the whole of my harvest, it can’t be up to that amount. It’s even my relations that are paying the bill at the National Eye Center now.
“I am appealing to the Kaduna State governor, the police and relevant agencies and well- meaning Nigerians to please come to our aid. We are also seeking justice for the unjust treatment by the teacher who purposely blinded my daughter.”

Rakiya, while narrating the incident, said the discipline master had asked 20 of them including the head girl to meet him at the school’s laboratory.

“He ordered all of us to roll on the dusty floor of the laboratory, and started beating each of us with the cane attached with iron balls. I told him I was sick and have injuries on my back, but he insisted on beating me until the cane hit my right eye and blood started coming out.

“The doctor said I will never see from the eye again unless I am taken abroad for proper medical attention. I am missing school because of our frequent visit to hospital,” she said with tears.
Continuing she said “Even after he injured me, he did not stop beating me until other students started shouting and a female teacher rushed in and stopped him. Some teachers in the school have been complaining about the way he beats and injures students indiscriminately.”

The Muslim Students Society of Nigeria, MSSN, which has taken up the case and promised to see to its logical conclusion, described the act as unjust and inhuman.

The group demanded that the authorities concerned should, as a matter of urgency, bring the culprit to book to serve as deterrent to others and to prevent the matter from escalating.

They also demanded for a better and appropriate medical attention for the victim to regain her sight in order for her to further her education.

He said petitions calling for justice in respect of the victim have been written to the state governor and copied to the Kaduna State Commissioner of Police, State Director of State Security Services and the Commissioner of Education.
Tweet