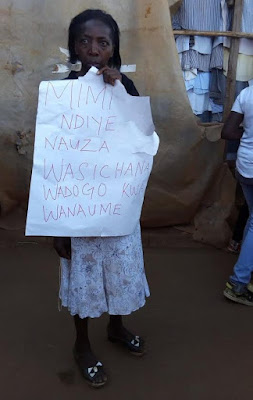 There was drama in Thika’s Majengo Estate after A middle-aged woman was on Wednesday, March 23, frog-matched across the streets carrying a placard for allegedly selling off young girls to older men for sexual exploitation.


This woman identified as Mary Wanjiru Karume was cornered in her house, jerked out and paraded along the streets before they attempted to force her to confess her evil deeds publicly.
According to the victim who is not yet 18, the woman, who is a personal friend and business neighbour to her mother, lured her to the said man last week Monday, where they bought some soft drinks. Two days later, she and her auntie (still a minor) were invited to a Thika Hotel where they were supposed to have a good time.
"Mama Ken (Wanjiru) introduced us to this man and told us that he was very rich and could buy us anything we wanted. She asked us not to ignore his approaches but instead take advantage of this ‘rare opportunity’ to squander his money. Later on Friday, he invited us for a meal at a Thika hotel where we were supposed to spend the evening,” said the girl.
Luckily for the minors, someone known to the family spotted them and called their mother. The mother tricked them into leaving the facility in a hurry by claiming that there had been an emergency at home and they needed to come very urgently.
It was at that moment that the girls boarded a tuktuk and rushed home to receiving the shocking news of the danger they were exposing themselves in.
Upon interrogation, the girl revealed that the man had promised to foot the bill for her birthday party bash that happens to be this week, to a tune of Ksh. 30,000.
After her mother’s warning, she blocked the man’s calls and have never communicated since then. Her phone call logs shows that he attempted to reach her twice after that meeting.
The girl’s mother was short of words as she could not imagine that her neighbour and friend could do that to her. She claims that on the material day, Wanjiru kept monitoring her movements, may be to keep track and warn the man in case something unusual happened.
“We have worked with her for quite a long time and I cannot believe that she can scheme such an evil plan against my own daughter,” she said.
However, she has declined to press any charges against the woman or the man since, according to her, her daughter was not harmed.
“Since God has saved my children from this danger, I am not willing to press any charges against them,” said the mother.
When confronted to respond, Wanjiru admitted to introducing the girls to the man but she claimed that she only showed them the man and warned them that he was dangerous because he was HIV positive.


"When I was taking them to him I wanted to show him to them and warn them that he was not a good person and he was fond of luring young girls into bed," said Wanjiru.
Source: The star Kenya
Tweet