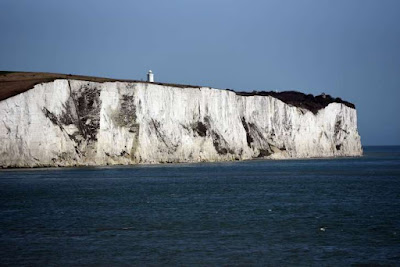 59 year old twins, Muriel and Bernard Burgess, who died after they fell from England's famous White Cliffs of Dover on New Year’s Day were carrying their parents’ ashes, investigators revealed on Tuesday. The twins had been struggling to come to terms with the deaths of their parents, according to a coroner.
Both twins were wearing backpacks, each containing the ashes of each of their parents.

The siblings fell more than 200 feet in an area known as Langdon Cliffs and were found by rescue teams who were initially searching for a missing Gulf War veteran, 45-year-old Scott Enion - whose body also was eventually recovered.

An investigation carried out by the police revealed that the Burgess twins had kept to themselves and lived together in a static caravan. They were both single with no children, unemployed, and financially unstable, with months of overdue rent owed to their caravan park manager.

For three months last year, the brother and sister disappeared and went into arrears on their rent, according to the caravan park manager.
DS Ward said:

“They returned and said that they had gone walking somewhere in the UK.”

It was further revealed that the twins had sought medical help for their “low mood” since their mother’s death in September 2014, senior coroner Patricia Harding said. She said:

“The evidence doesn’t disclose to the required standard of proof whether there was an intention by them to take their own lives or if it was indeed simply a tragic accident."

Detective Sergeant Stuart Ward said there was no clear indication whether the Burgesses had gone to scatter their parents’ ashes before their tragic fall.