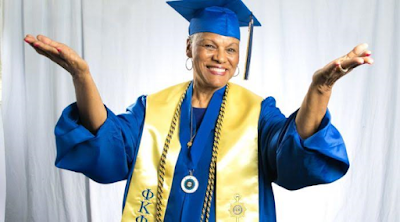 72-year-old Darlene Mullins, a grandmother-of-four will be among the 800 students to graduate from Tennessee State University, TSU, on the 6th of May. Darlene will be receiving her degree 55 good years after she started at the institution.


Darlene began her studies in TSU campus in 1962, however, almost immediately, she fell in love with fellow student John Mullins, a senior from East St. Louis, Illinois, who she described as dashing, handsome and “everything to behold".
They got married and she had to quit her education to focus on her new family while John stayed on and graduated in 1964. In putting her education aside, she also had to give up on her dream of becoming an Olympic track star.

"I came to TSU because I ran track. I wanted to go to the 1964 Olympics," Darlene said. "Wilma Rudolph was my idol and I was on my way. I get to TSU and meet the great coach (Ed) Temple, but we bumped heads, because I had to make a choice between his track team or Mr. John Mullins." 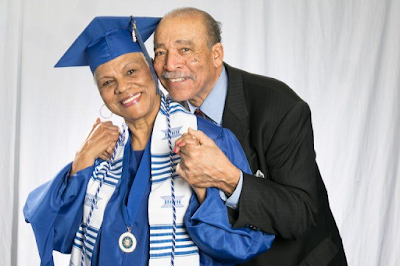 When her children became a bit older, Darlene started a career in retail and cosmetology. Her husband, John, also started his own advertising/marketing business after years of working in corporate and government organizations and it turned out successful. In spite of Darlene's success in business, she felt the need to complete her education, so she decided to make it happen and John supported her fully.


"I love this woman so much and always told her whenever you are ready we will go because this is something I knew she always wanted and I will do nothing to hold her back," John said.

In July 2013, the couple moved back to Nashville to allow Darlene to return to TSU and pursue a degree in interdisciplinary studies. At times, she took as many as 20 credit hours a semester, and maintained top grades. With the 25 credits she had accumulated before dropping out in 1963, Darlene is completing her college work in four years. A member of three honor societies, she is graduating summa cum laude. This May, Darlene will be among the more than 800 graduates at the undergraduate spring commencement in the William Jasper Hale Stadium on TSU’s main campus.
"My graduation from college, for me, confirms that I completed what I started more than 50 years ago,” Darlene said. “I am happy."
Tweet