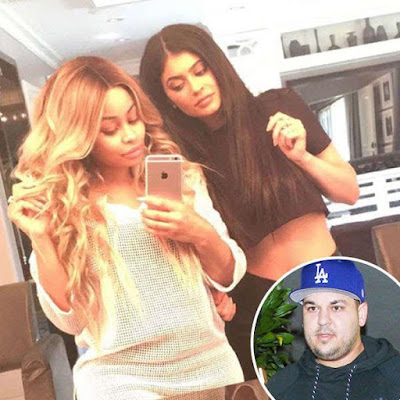 The latest episode of Keeping Up With the Kardashian features the most explosive fight ever between Blac Chyna and Rob. The episode was shot earlier in the year, when baby Dream was only one month old.

The fight caused the Kardashian family to advise Rob to end the relationship considering that it was toxic.
Kris Jenner's boyfriend, Cory Gamble explained how if he hadn't gotten to Rob and Chyna's home, things would have got out of hand. The couple got physical as they fought and Corey had to drag Chyna off Rob.

“I ran over there to just get Rob and make sure he was safe and that he didn’t do nothing stupid,” Corey explained to Kylie. “Her nails were all f****d up. One of her real whole nails was gone. She was trying to bust his car window!”

Rob later expressed his feelings about the fight with Chyna. He told Kim and Corey that he was hurt and needed people to know that.


“I wanted people to know I’m hurt, that this is f****d up,” Rob told Kim Kardashian and Corey. “The fact that you say if he doesn’t get his s**t together in a year I’m going to drop him. Who are you to say I’m going to drop you?”

Kim took her brother’s side, as she called Chyna’s motives “ “hurtful.”


“I’ve always felt them as a couple isn’t that healthy,” she said. “And I think they know that too. It’s not some secret. This all has to stop. It’s so clear what this relationship is and that they’re not meant to be with each other.”

Meanwhile, Kylie Jener, who owns the house Blac occupied and Rob occupies was more upset about her house which was trashed when the couple fought.


“My mum calls me and apparently Chyna threw something at my television. It’s a little disrespectful and I wouldn’t do that to someone else’s home.”Its really hard to support a relationship that’s really unhealthy. I wish they would both stop this roller coaster ride."

Rob and Chyna eventually got back together but his sisters were not in support and warned him about it. but Rob refused to take their advice.
Khloe Kardashian questioned why he would stay in something so “dark and toxic.” She said;


"I really thought there was no way in hell he would forgive her. The things she was saying and doing and the names she was calling him."

"You guys are speaking out of your a** so stop being stupid," replied to his sister.

"You have your head so far up Chyna’s a**,” Khloe fired back. Then she added in her confessional, "I don’t want my brother to keep getting taken advantage of. Does she still communicate with you when you aren’t filming? To me it doesn’t look that way."

The Kardshian sisters concluded that Chyna was only with Rob because of their spinoff show, Rob and Chyna, and they wondered if it would not be wiser to put an end to the show so that Rob could finally let go of Chyna, but their only brother did not agree with them and revealed that the show has helped him improve his weight and depression issues.


"You can’t tell somebody how to live their life. You have to experience yourself," Rob said. "I do love her and want to be with her so I’m not going to just give up."

Since this latest episode was shot earlier in the year, Rob and Chyna have separated and come back together again multiple times.
Tweet