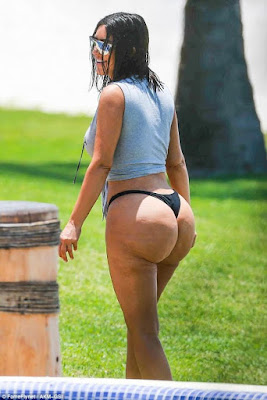 Oh well! Now, it's obvious most of Kim Kardashian's followers on Instagram were there for the booty and after recent un-airbrushed photos of Kim emerged, with her backside looking dimpled with cellulite, they are beginning to hit the unfollow button.


Since Kim's unflattering photo emerged, the self-acclaimed queen of selfies has lost over 100,000 followers on Instagram. A number of people claim that the unflattering photos prove that Kim is fake and has been photoshopping her Instagram photos all these while.
While some fans unfollowed quietly, some others decided to call her out for it.

"Your body is completely fake,”  one wrote.
Another wrote: "Absolutely unbelievable. Wake up and face reality. Photoshop is your best friend @KimKardashian."
Kim still remains the fifth most followed person on Instagram after Ariana Grande, Beyonce, Taylor Swift and Selena Gomez, so the recent loss of followers doesn't seem to have hurt her fanbase much.
Tweet