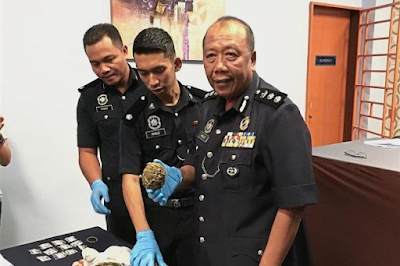 Malaysia Police on Thursday, April 27, said they arrested a Nigerian cook after he was found to be in possession of cannabis worth RM2,000. Serdang police chief assistant commissioner Megat Mohd Aminuddin Megat Alias said the 42-year old Nigerian man was arrested near Pangsapuri Anggerik, Taman Suria in Seri Kembangan, on Saturday, April 22.

His 32-year old girlfriend, who is also a Nigerian, was also picked up by the police in his flat.
Megat said he was found carrying a plastic bag containing 24 small packets of dried leaves, believed to be cannabis. The packets weighed 150 grammes.

"We seized some RM2,000 worth of ganja packed in small packets and sachets.

"We believe the suspect had been operating his drug business near a restaurant where he worked," he said.

Further checks in his flat found another bag containing cannabis, weighing 727.68 gram. Megat said, based on the initial probe, the man had no work permit while his girlfriend is a student in a private college.

"The man had been staying in the country for 10 years. He had entered the country under the pretext of pursuing his studies here. He has only been active in drug trafficking since several months ago," he told a press conference at the police district headquarter on Thursday.

Megat said the man used the restaurant he worked in to sell drugs, with most of the customers comprising foreigners.
The case is investigated under Section 39B of the Dangerous Drugs Act 1952, which carries a death sentence upon conviction.
Tweet