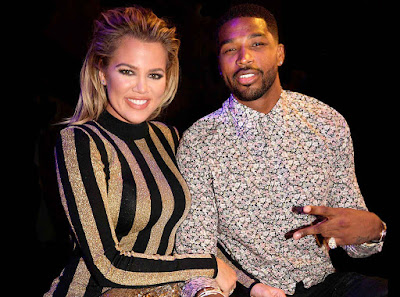 That's what Radar Online isreporting. Khloe Kardashian recently told a magazine that she was more than ready for marriage and babies with boyfriend, Cleveland Cavaliers' Tristan Thompson but Radar Online is claiming that Tristan feels differently and is ready to run...

"Khloe has been showering Tristan Thompson with gifts, birthday parties and public declarations of love, but sources tell RadarOnline.com that he’s “getting cold feet” and has told her he wants to slow things down.

“Tristan’s barely getting used to the idea of being a dad and here’s Khloe pushing him into a high-profile engagement.”

“He really likes Khloe but not the package deal — and her pushiness with him is starting to scare him off.”

As Radar reported, Kardashian has been spending at least $50,000 a week on her basketball boyfriend, including for a huge bash when he turned26 in March. “He was pissed that Khloe threw all that money on his birthday, just for bragging rights,” the insider told Radar.


“His friends are calling her ‘Khloe Warbucks’ after the rich guy in Annie.” Even Thompson’s loved ones want him to rethink his relationship with the 32-year-old reality star. “All his friends and family are begging him to get out of this situation before that family takes over his life,” said the insider.