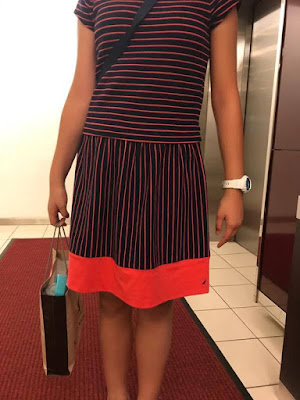 A chess coach in Malaysia is demanding a public apology for one of his students after the 12 year old was forced to withdraw from a tournament that took place April 14-16 due to her 'seductive' dress.

In a Facebook post, the coach, Kaushal Khandhar, explained what took place at the National Scholastic Chess Championship in Putrajaya, Malaysia. He posted a photo of the 12-year-old competitor’s dress and wrote:

A lot of people on social have also expressed their disgust in the arbiter's disqualification of the 12 year old with some calling him a  pervert and others saying Malaysia is 600 years behind because there is nothing wrong with the girl's dress. Others said the girl's dress was very appropriate and that she should have been allowed to remain in the game while the arbiter should have been escorted out for his immorality. 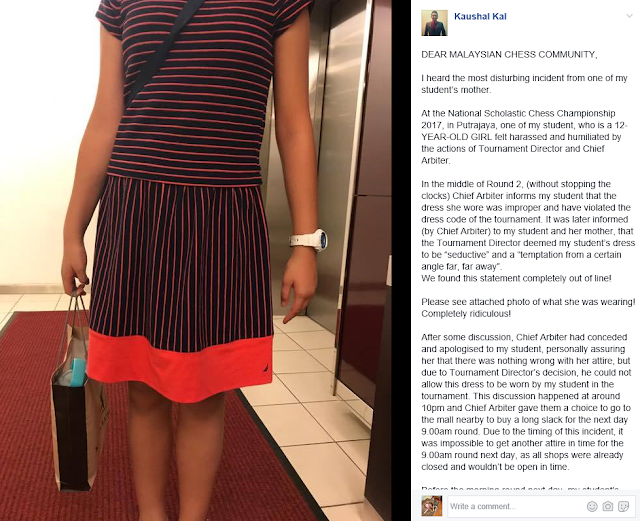 I heard the most disturbing incident from one of my student’s mother.

At the National Scholastic Chess Championship 2017, in Putrajaya, one of my student, who is a 12-YEAR-OLD GIRL felt harassed and humiliated by the actions of Tournament Director and Chief Arbiter....

In the middle of Round 2, (without stopping the clocks) Chief Arbiter informs my student that the dress she wore was improper and have violated the dress code of the tournament. It was later informed (by Chief Arbiter) to my student and her mother, that the Tournament Director deemed my student’s dress to be “seductive” and a “temptation from a certain angle far, far away”.
We found this statement completely out of line!

Please see attached photo of what she was wearing! Completely ridiculous!

After some discussion, Chief Arbiter had conceded and apologised to my student, personally assuring her that there was nothing wrong with her attire, but due to Tournament Director’s decision, he could not allow this dress to be worn by my student in the tournament. This discussion happened at around 10pm and Chief Arbiter gave them a choice to go to the mall nearby to buy a long slack for the next day 9.00am round. Due to the timing of this incident, it was impossible to get another attire in time for the 9.00am round next day, as all shops were already closed and wouldn’t be open in time.

Before the morning round next day, my student’s mother called Tournament Director regarding this matter, initially he had replied that he was not aware of the situation but after a brief discussion, it was realized that he knew all the details on this incident prior to this phone call. He promised to return the call upon discussion with Chief Arbiter, but this did not happen. He would further not answer or return any calls of my student’s mother.

This situation had led to the inevitable decision of withdrawal from the tournament all together.

We are absolutely DIGUSTED by the treatment of Tournament Director to a 12-year-old girl and her mother. This incident has resulted in loss of time and money which was invested before, during and after the tournament on coaching, registration fees, travelling, accommodation and other incurred cost.

This bright young girl was recently the champion of her district in MSS Kuala Lumpur and has shown tremendous potential in Chess. This incident has left her extremely disturbed, and embarrassed.

I have been playing chess in Malaysia for almost 2 decades and I have never heard this type of issue ever in any tournaments in Malaysia. This should be the first and last time this kind of issue ever appears, I or anyone of us should never accept this in our Chess Community.

We demand a public apology from Tournament Director of National Scholastic Chess Championship 2017. In the event, we do not receive a public apology in the next 5 days, we shall have no choice but to resort to legal proceedings.