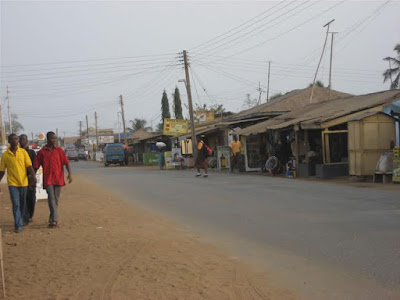 A 40 year old Nigerian man identified as Alhassan Zambram was early this week found dead in his room at the East Tanokrom, a suburb of Takoradi, Ghana. Although the exact circumstances leading to his death is yet unknown, it is suspected that he was murdered as a blood stained machete was found lying close to his corpse.
Confirming the incident, the Public Relations Officer of the Western Regional Police Command in Ghana, Olivia Eyrabena Adiku, said that the police was investigating the incident.

According to Olivia, one Fusieni Ibrahim, the landlord of House Number H/No.Pt.197 East Tanokrom, informed the police in the area about the alleged murder. ASP Adiku said the landlord told the police that at about 5:20 am on Monday May 1st, he went to the mosque to pray and when he returned he was informed that his tenant Alhassan Zambram, a Nigerian national, has been found dead in his room. She said the landlord and other tenants rushed to the police station to report the case and later the body was conveyed and deposited at the Effia Nkwanta Regional Hospital mortuary at Sekondi for preservation and autopsy. According to Adiku, no arrest has been made.

“We are still investigating. We cannot say anything at the moment. We are not ruling out foul play though.”she said