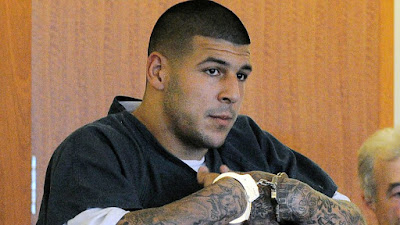 On Friday, Bristol County Massachusetts court officials released an excerpt of the suicide note former NFL player, Aaron Hernandez, who was a Tight End for New England Patriots, left his fiancée, Shayanna Jenkins-Hernandez. Before Aaron killed himself in his prison cell last month he left 3 suicide notes. The one he left for his fiancée partly reads: "Shay, you have always been my soul-mate and i want you to live life and know I'm always with you," Hernandez wrote. "I told you what was coming indirectly! I love you so much and know you are an angel -- literally! We split into two to come change the world! ... I love you! Let [redacted] know how much I love her! Look after [redacted] and [redacted] for me -- those are my boys. (YOU'RE RICH)" I KNEW I LOVED YOU- SAVAGE GARDEN

According to Massachusetts law, a dead convict whose appeal has not been heard can be considered not guilty in the eyes of the law. Hernandez’s appeal for the 2013 murder of Odin Lloyd was still pending when he hung himself on April 19.

Hernandez had apparently talked about this law in the days before he committed suicide, according to a fellow inmate at Souza-Baranowski Correctional Center.

He might have believed that death (even through suicide) could mean the possibility that his former team, the New England Patriots, would have to honor withheld money (unknown) and/or that his estate would not be liable for any civil suits.

Hernandez was convicted of the murder of his former friend, Odin Lloyd
Tweet