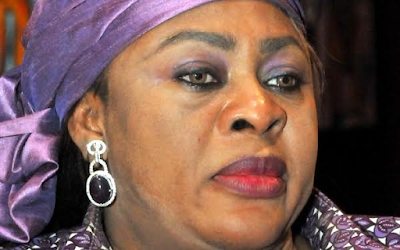 A Federal High Court sitting in Lagos has fixed May 30th for the hearing of a lawsuit filed by Sterling bank against former Aviation Minister, Senator Stella Oduah, over alleged indebtedness to the tune of $16.4 million and N100.5 million. Sterling bank had filed the lawsuit against Oduah and her company, Sea Petroleum and Gas Company over the money which they collected as loans and have failed to service it over time.
The court had earlier freezed the account, stopping Oduah and directors of the company withdraw from the account of the company At the resumed hearing of the case today, counsel for Sea Petroleum Company, Ijeoma Esom, told the court that she had not been served a copy of the court process, saying she has filed a preliminary objection to the suit.

Also, counsel for Stella Oduah, Mr A. Nweke, said he had not been served the court process. Nweke informed the court that he has filed an application urging the court to discharge the order of the court freezing the account of Stella Oduah and her company.

Objecting to his motion, counsel for Sterling Bank, Kemi Balogun who led a team of nine lawyers including a Senior Advocate, Funke Aboyade, said the court had made an order for the service of the court processes to be advertised in national newspapers which was done in two nationl dailies.

He,thereafter, showed copies of the newspapers to the court and corroborated his position with the proof of service by the court’s bailiff. However counsel to Stella Oduah and her company, urged the court to grant them extension of time to enable them to file their responses to the petition.

The court had in February  granted an order restraining Senator Oduah, her companies and their directors from making any withdrawal from the account because of the $16.5 million dollars and N100.5 million owed the bank by the senator and her companies.
Tweet