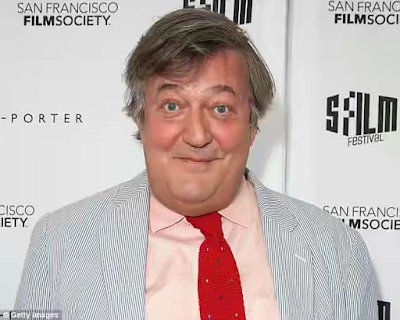 English comedian, Stephen Fry has never hidden his atheism but this time, someone who decided he went too far reported the gay entertainer to the police and he has been placed under investigation. The incident in question goes as far back as February 2015 when the comedian took a hardline stance against God during an interview with Irish broadcaster RTE.
The individual, who wished to remain anonymous, said it was their 'civic duty' to report the comments which he alleges were in breach of the Defamation Act.  TV footage showing Fry condemning God has gone viral and has been viewed millions of times on YouTube.
Asked what he would say if he was confronted by God, Fry replied: 'How dare you create a world in which there is such misery that is not our fault? It's not right.
'It's utterly, utterly evil.
'Why should I respect a capricious, mean-minded, stupid God who creates a world which is so full of injustice and pain?'
Questioned on how he would react if he was locked outside heaven, he responded: 'I would say, 'Bone cancer in children? What's that about?'
'Because the God who created this universe, if it was created by God, is quite clearly a maniac, utter maniac.
'Totally selfish. We have to spend our life on our knees thanking him? What kind of God would do that?'
The offence of blasphemy, included in the Defamation Act, is punishable by a fine of 25,000 euro under Irish law.
A spokesman for the police said: 'We are not commenting on an ongoing investigation.' Fry, 59 is married to 28yr old Elliott Spencer.
Tweet