Fist fight erupts on a flight from Japan to Los Angeles 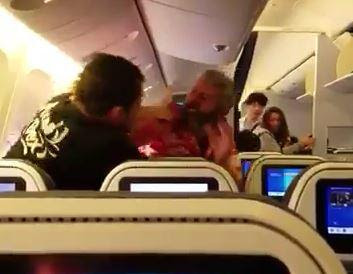 Two male passengers were filmed throwing punches at each other on a Japanese plane headed to Los Angeles. The fight broke out right before the All Nippon Airways flight took off from Tokyo.


According to passengers, the men were arguing about something and it escalated into a fist fight.
The men kept throwing punches even as a flight attendant and other passengers tried to stop them. One of the men was dressed in a black coloured T-shirt while the other had on a red shirt.

"Someone help. This guy is crazy," The combatant in the black t-shirt screamed as they separated momentarily but the other man struggled to get another punch in and the fight continued again, while a female flight attendant desperately tried to separate them. 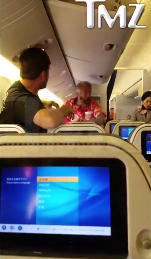 Peace returned to the aircraft for a while, after the aggressive adversary walked away. However, as
the second man settled into his chair, the other man in a red shirt returned and attacked him again.
The fight ended after one of them, who happened to be a 44-year-old American, was removed. Report has it that as he was being taken away, he choked an airline employee in the terminal and this led to him being arrested for assault.
Tweet