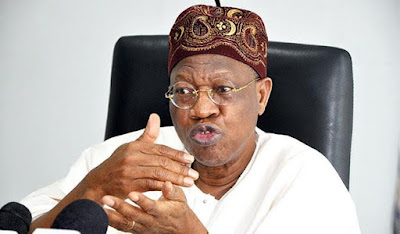 Lai Mohammed yesterday refuted claims in some quarters that President Buhari's health has deteriorate so bad that he is now being fed with a tube.

According to Lai Mohammed, that assumption is absolute bunkum and there is no truth to it. He said this when asked by a state house correspondents if this speculation was true.


“The answer to your first question is absolute bunkum. It is absolutely untrue that he is being fed. He was in the office yesterday as you all reported. And if the doctors say he should take a rest, because they think he’ll recover faster, then he ought to rest rather than forcing himself to work when he is not fit to work. All he’s doing is following the doctor’s advice. Mr. President himself told the nation he had never been this sick and he is going to take it easy. He said it from day one when he came back from the United Kingdom. So, whatever is happening today is not any strange development. It is exactly what he said: that he’s been advised to take it easy by his doctors and that he will soon also go back for further treatment. So, I don’t think it’s anything that is out of the place from what he said. He has been quite transparent and upfront in the matter concerning his health" he said