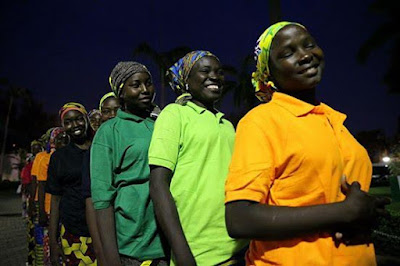 PDP has condemned the exchange of Boko Haram members for the release of 82 Chibok school girls who have been in the terrorist captivity for over three years. On Saturday May 6th, the girls were released in a prisoner swap with some Boko Haram members who were in detention.

In a statement released last night, PDP says it welcomes the release of the girls but however faults the approach for their release.
According to a statement signed by Prince Dayo Adeyeye National Publicity Secretary PDP-NCC,  the party says the release of the Boko Haram members is a setback for the War on insurgency. The party maintains that their release is tantamount to releasing them to resume their war against society.

Read the press statement below...

The Peoples Democratic Party (PDP) led by Senator Ahmed Makarfi, CON, has described the recent release of 82 Chibok girls as a welcome development. The Capture and detention of these girls by the Boko Haram terrorists in the last three years had brought extreme pain and suffering not only to their families but to the people of this Country and men and women of goodwill all over the world. What is however of great concern is the price paid to secure the release of the girls. According to reports, the girls were released in exchange for the release of suspected Boko Haram terrorists. If that is the Case, we say it's a heavy price to pay and an unusual one at that.

While we welcome the release of the girls, we do not think that exchanging innocent girls for hardened criminals like the terrorists is the right approach for the following reasons:

1). The suspected terrorists by this release have escaped justice; and all the effort made by security agencies to bring them to book has come to nothing.

2). The release of the terrorists is a setback for the War on insurgency. Their release is tantamount to releasing them to resume their war against society. Many of them could find their ways back to the terrorists camps from where they could unleash terror against the Country. Others who are allowed to roam freely in society could become veritable recruiting agents and purveyors of suicide bombing and urban terrorism.

3). The Boko Haram terrorists are emboldened to continue with their tactics of kidnapping innocent people with the belief that they can always use it to blackmail the Government to release their members and to extract other concessions.

4). The piece meal release of the girls means the terrorists want to extract more concessions from the Government which in the end can only prolong the insurgency.

5). The release of the girls will increase the agony and high expectancy of the remaining girls still in custody of the terrorists and their families who will be wondering why they have not been so lucky. It therefore would have been better to ensure the release of all the girls at once.

7). However, we recognize the concern of President Buhari to ensure the earliest release of the Chibok girls for domestic and international considerations. Equally, we are very concerned about the safe return of the girls to their families at the earliest possible time. But we disagree that negotiating with the terrorists is the right approach to achieving the objective.

8). Meanwhile, we rejoice with the girls and their families and hope that their remaining colleagues will join them in freedom in no distant future.
Tweet