Home » Arts and Entertainment » Strength of a woman! Adaeze yobo opens up about her motherhood struggles

Strength of a woman! Adaeze yobo opens up about her motherhood struggles 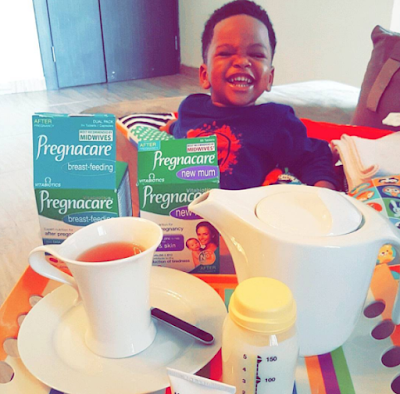 It's inspiring how women can be going through the toughest struggle yet act strong like everything is perfect. Adaeze Igwe-Yobo has shared the story of her struggles as a new mother and it is unbelievable the things she's had to go through.

She shared a photo of her grinning second son and a tray containing tea and drugs that help mothers produce breast milk. In the caption, she disclosed that while some women have it easy producing breast milk, it was hard for her. She said her youngest child, who is less than 3 months old, is the only child she has breastfed for this long.

With her first son, she had to take a lot of liquid foods, yet could not produce enough breast milk for him. The food made her add weight, the stress to produce enough food for her son made her lethargic, still in all of this, not enough milk was coming and it only compounded her C-section pain. It was so bad that she and her first son cried at some point. She only breastfed him for 3 weeks. With her second son, it was the same and she had to supplement with formula. It's been easier with her daughter though she still has to take Pregnacare to aid milk production.

Below is how she told her story.

Baby no 3 is the only baby i breastfed for this long. Some have it easy and others like me drank 2large bowls of custard, took nursing tea n all and still had only 1-2oz of breastmilk, gained tons of weight and had no energy most of the time, so I gave up early cos the baby and i Cldnt deal with the stress. With my ist son, we both cried cos i was in C-sec pain, had bad PND and baby wasnt getting enough milk. to think i actually planned to breastfeed for 2years, and only did it for 3wks

2nd one I swore I wldnt even breastfeed cos of my last experience but once I had him, he latched unto the boobies like a pro so I gave in but the milk was still low at 5weeks, so i had to supplement with formula which was a bad idea cos he fell in love with the milk flow and rejected boobie.

However, with "ma piinches" (My princess) *in jaydens voice* it's been pure bliss, no PND, I'm always full of energy even though I don't get as much sleep at night. Anyway, i dont know how long I want to breastfeed for, I'll just go with the flow for now cos I like the way she looks into my eyes while nursing

have a great day lovers