'Cristiano Ronaldo unfortunate to be of the same generation as Messi' - Jay Jay Okocha claims. 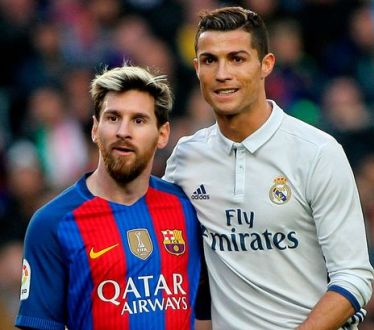 Despite Real Madrid and Portugal star footballer, Cristiano Ronaldo being prime favorite to win this year's FIFA's Best awards and Ballon d'or - Super Eagles and African football legend, Jay Jay Okocha feels the Portuguese is unfortunate to be in the same generation as his rival, Lionel Messi.
Ronaldo's heroics for Real Madrid this season, helping them win the UEFA Champions League and La Liga titles means he will most likely win his 5th Ballon D'or Award (leveling up with Messi) and his second FIFA Best award (surpassing Messi who has none), but former PSG and Bolton Wanderers star, Jay jay Okocha thinks differently.

In an interview with FIFA.com, Okocha said: "I have to be diplomatic here, especially as I’ve a lot of Portuguese friends, but I tend to lean towards Messi. He’s a more natural talent"
"Ronaldo is a fantastic player, one of the best I’ve ever seen, but he’s been a bit unfortunate to be of the same generation as Messi. Consequently, they have to share the limelight," he added.
"Messi and Ronaldo have dominated world football for a decade and, given the nature of football, at a certain point the baton will have to pass to someone else. "I think Neymar has a great chance of filling that role."