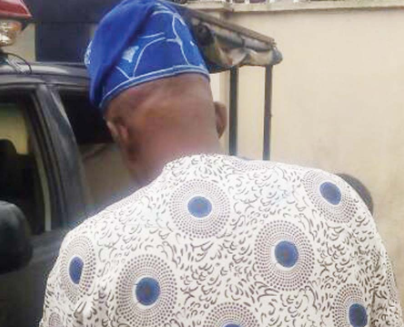 The Lagos state police command has arrested the Baale of Oshoroko Village in Ibeju-Lekki area of the state, Olusegun Oyeri, and three others identified as Aroki Badiru, Nasiru Isiaka and Akeem Balogun. for allegedly masterminding the death of a police inspector, Musa Sunday, and hiding his body for nine months.

According to reports, the deceased had gone to the area to answer to a distress call on November 29th last year. He never returned to the police station, prompting his colleagues to go in search of him. After many months of fruitless search and investigation, a member of the community confessed to the police that the inspector was killed and that they were made to swear an oath of secrecy by the Baale never to reveal what happened to him.

The community resident then took the police to the Ibeju-Lekki water-front where the deceased was buried. Police officers dug the grave and exhumed the remains of the deceased and his AK47 rifle. The community leader was arrested and when interrogated, denied any wrong doing. He claimed the crime was perpetrated by one of the chiefs.

The Lagos state Commissioner of Police, Fatai Owoseni, who confirmed the arrests, said
“Inspector Musa Sunday disappeared from a crime scene in Ibeju-Lekki when he was, alongside other officers, deployed to that axis from Ibeju-Lekki Free Trade Zone. In the course of patrol, they were alerted by the community of a communal fight between two families over land issues. Dutifully, they joined the informant but on getting there, one of the community callously turned against the patrol team and at the end of the fight, the team returned without Sunday. The next day, I went there and met the traditional rulers and elders of the community to appeal to them to release the inspector if they have him in their custody. They denied seeing him. We put together a team of policemen with technical support from the Inspector General of Police Intelligence Response Team (IRT) led by DSP Philips and they sustained investigations. Based on intelligence, nine months later, his decomposed body was found buried along the waterway with his service AK47. We swung into action and arrested the Baale of the community and three others. The law does not respect anyone and we use this to send a message to criminals pretending to be custodians of our culture. During investigation, we gathered that the Baale led the community in swearing an oath of secrecy to cover the crime and also refused to produce his two sons that were responsible for the killing.”

The Baale and the others would be arraigned in court soon.
Tweet