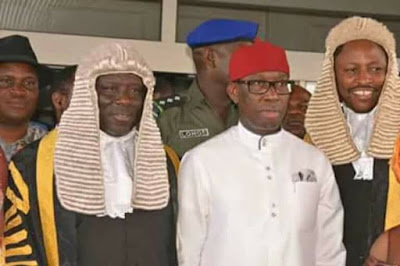 Dr Ojougboh had accused Governor Okowa’s administration of operating a blank 2017 budget but, reacting for the first time, Governor Okowa said, “in the first instance, I will not react to comments made by somebody who, though went to school, but made very unintelligent comments.”

The Governor stated that he was not disturbed by such allegations, "what is the budget if it is blank? So some comments appear stupid and unintelligent, but, we are in a country where some persons can say whatever they want because, there is freedom of speech but, it is only fair that people who went to school should be able to speak in a manner that reflects their intelligence because, when we speak unintelligibly, it is very unfair.”

He also disclosed that his administration has severally, assisted the local government councils to meet with their financial obligations to their workers.

According to the Governor, “in the last two years we have intervened with the excess of N5 billion because, even in January 2016 when it appeared we were good with the allocation from FAAC, we gave N3.26 Billion to the local government councils.”