Home » Local » THE ASABA MASSACRE: IN SEARCH OF HEALING AND FORGIVENESS 50 YEARS AFTER

THE ASABA MASSACRE: IN SEARCH OF HEALING AND FORGIVENESS 50 YEARS AFTER 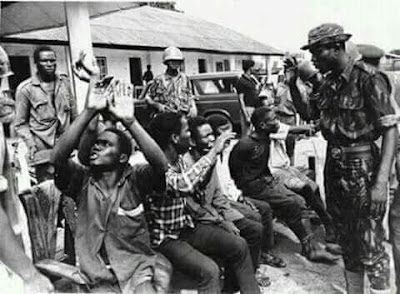 On October 5, 1967, during the bloody civil war, federal troops occupied the peaceful town of Asaba, Nigeria, on the west bank of the Niger River. They accused the people of supporting the retreating Biafran army and for two days rampaged the town killing hundreds of innocent, unharmed citizens.

At the crux of this genocidal act, on Saturday, October 7, 1967, thousands of the people of Asaba, came together screaming ''One Nigeria, One Nigeria,'' believing a show of support for the Nigerian government would pacify the situation. Instead, after the separation of the women and children from men and adolescent boys, the bullet-hungry soldiers gathered the male folks in the centre of the Ogbe-Osowa village and turned their machine guns on them.

More than 700 died with many seriously wounded. Most families could not retrieve the bodies and the dead were buried in mass graves. At the end of that week, more than 1000 civilians were killed, raped, molested, threatened and Asaba laid in ruins. Many fled never to return until the war ended in 1970.

Colonel Murtala Mohammed was the commanding officer of the 2nd division which was responsible for the legendary beating back of the Biafran Army from the Mid-West Region, as well as crossing the River Niger and linking up with the 1st Division which was marching down from Nnsuka and Enugu.

Whether Murtala ordered the massacre or not, it was his division and must therefore take full responsibility.

The casualties were not soldiers or combatants. They were not caught by friendly fire or accidental discharge. They were gathered together and gunned down in what remains one of the most callous incidents of the Nigerian Civil War.

Interestingly, the Asaba story was never told as the starving children of Biafra dwarfed the gory event in Asaba.

After the soldiers left, leaving blood and death behind, the stinking unidentified bodies were buried in a mass grave by the lucky survivors.

For decades, Asaba has lived with this horrific and traumatic experience in silence. Most Nigerians have never heard of the fate that befell Asaba people on October 7, 1967. Ironically, those who led this massacre rose to become national heroes, with monuments named after them and beautiful stories told about them.

It is therefore pathetic that those who murdered unarmed civilians in Asaba have never been reprimanded in life or in death, neither has the Federal Government of Nigeria admitted that its troops murdered its citizens, who pledged unflinching loyalty, without provocation is a dent on Nigeria’s image and a shame to a country ''where peace and justice'' is supposed to reign.
We must know our history. #HistoryVille