Home » Local » Niger Delta Avengers says, 'we are back and will not spare anything or anyone on our path to actualize a united Niger Delta'

Niger Delta Avengers says, 'we are back and will not spare anything or anyone on our path to actualize a united Niger Delta' 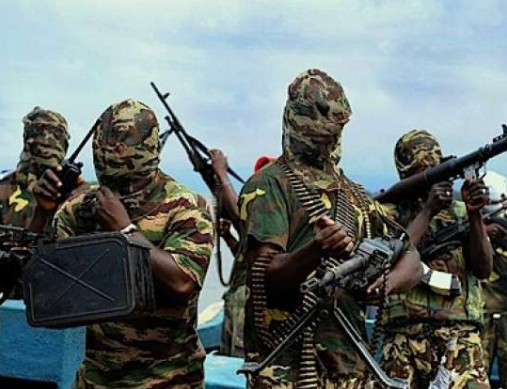 The new statement says the Niger Delta Avenger's cease fire on operation 'Red Economy' is officially over and it will not spare anything or anyone on its path to actualize a united and free Niger Delta.

Read the full statement below...
The High Command of the Niger Delta Avengers wishes to bring to the notice of the International Community and the general public that there is no such militant group with the nomenclature, "Reformed Niger Delta Avengers"; it is not operated by any of our operatives but a money making tool in the hands of certain disgruntled Niger Deltan political jobbers in connivance with top government functionaries of the Buhari led Nigerian Government.

The Intelligence Unit of the NDA has gathered from our sources in the Nigerian Government that the operatives of the said Reformed Niger Delta Avengers are some fraudsters from the Niger Delta region working with government functionaries like the office of the Director General of DSS, office of National Security Adviser and office of the Minister of Transport. The chain of Niger Delta fraudsters is which been led by one Richard Akinaka, Myke Loyibo and Famous Daunumugha and a host of others; has vowed to stop at nothing until they help the Nigerian Government to jeopardize the sincere efforts of the Niger Delta People at Economic, Social and Political freedom.

Instead of allowing us to continue our quest to bring the Nigerian economy to our targeted zero daily production, which recorded huge success; you threatened us with Tompolo to stop the struggle; out of respect for elders and not to the threat of Tompolo we adhered the call and halted our strike actions hoping you (PANDEF) would keep your own side of the bargain.

The question to Tompolo and the PANDEF is to tell us what progress they achieved since we heeded your retrogressive call,  to whose benefit is the move by Tompolo and the Niger Delta elders to impede a mission sanctioned by our ancestors and the Almighty?

Tompolo, we want you to know that we never started this struggled with the intent of living forever but with our lives already offered for a sacrifice for a better Niger Delta. We invite you to come after us with your total force as we are no longer ready to heed uninspiring advise from you or anyone else in the Niger Delta Region.

We have since lost faith in you (Tompolo) and PANDEF and have vowed never to heed any such retrogressive call or advise from you in the future; the recent disruption of the PANDEF 4th National Assembly by the Nigerian Government is the final evidence we needed to conclude that the Federal Government of Nigeria reserves not even a iota of respect for you (Tompolo) and the Niger Delta Elders as the position of the Nigerian Government is made emphatically known to the Niger Delta People that it's ONLY interest remains the flow of oil from our region to the Central Bank of Nigeria. We want to make it known to the PANDEF and the Nigeria government that our call for halt on "Operation Red Economy" is officially over.

We have just concluded head count of our operatives across the Country; we are pleased to announce that all our operatives are intact and focused; ready to implement instructions from the High Command of the NDA in the going few days.

To the Nigerian Government, we are aware of Egina FPSO built in South Korea by Samsung to be operated by Total Nigeria is one of the biggest FPSO built in South Korea has started it's voyage to the oil fields of the Niger Delta to further exploit us while our concerns are left unattended. We are presently tracking and monitoring it's movement; and God willing it shall not operate successfully in amidst the return of the fury of the Niger Delta Avengers.

Message to the Oil Companies; Our next line of operation will not be like the 2016 campaign which we operated successfully without any casualties; this outing will be brutish, brutal and bloody, as we are shall crush everything we meet on our path to completely put off the fires that burn to flair gas in our communities and cut every pipe that moves crude away from our region. We can assure you that every oil installation in our region will feel warmth of the wrath of the Niger Delta Avengers.

To you the operators of the social media Avengers (RNDA), be reminded that the Niger Delta Avengers are not the same as the toothless and cowardly MEND; we are men of our words and may it resonance in thy ears and deep down your bowels and that of your partner's in government whose interest is the suffering of the people of the Niger Delta that we (The Niger Delta Avengers) are back and will not spare anything or anyone on our path to actualize a united and free Niger Delta.

According to John F Kennedy; Those who make peaceful  revolution impossible will make violent revolution inevitable.